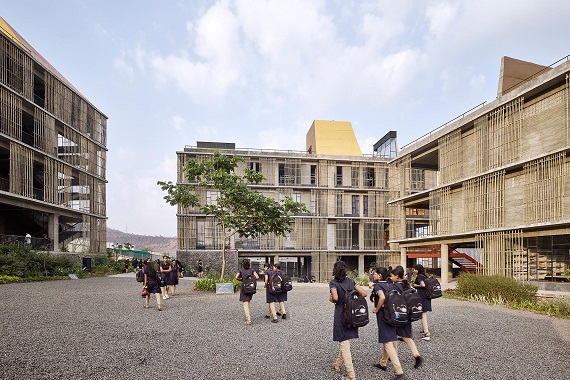 Avasara Academy, a residential school campus located in the rocky agrarian valley of Lavale in Maharashtra, consists of six similar buildings, each with classrooms on level 1 and 2, and student dormitory and faculty residences on level 3 and 4. Its uncompromising architecture is simple, climate-oriented, functional, sustainable, flexible, affordable, aesthetical, visually exciting and inclusive.

Avasara, with high ambition, a modest budget, and scrupulous attention to detail, achieves comfortable internal condition and nearly net-zero energy status without the use of any mechanical system despite the warm and humid climate. Additionally, use of local resources and passive heating-cooling systems design reduced the initial construction cost by approximately 7% and annual energy cost by nearly 80%.

Photovoltaic solar panels on the building roof provide electricity for ceiling fans and electric lighting in the building, while solar water heaters provide hot water for showers. Together, this accounts for around 85% of the energy requirement of the building. 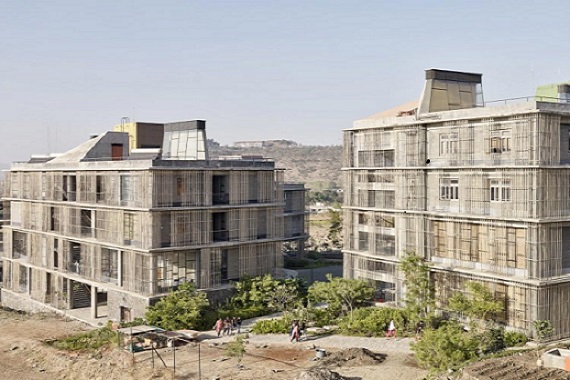 The six four-storeyed rectangular blocks, organized as per the most favorable orientation, follow the undulating hillside acknowledging contours and seeking the best vistas.

The campus is characterized by an inter-connected yet informal arrangement around pathways, courts, gardens and terraces.

Articulated concrete construction includes the skeleton structure with reinforced concrete floors and the prefabricated structural ceilings. This raw concrete along with the locally sourced stone interior acts as an inert thermal mass; absorbing the solar thermal energy during the day and releasing it again after a delay overnight, resulting in a moderate, more consistent radiant temperature inside the building.

The reinforced concrete floors / ceilings project outwards a little, creating generous overhands which not only provides the facades horizontal articulation but also acts as a form of brise soleil.

The façade is shrouded in bamboo screens with variations in the patterns based on the façade orientation. These locally sourced and skilfully designed screens serve as sun protection, thus preventing excessive heating of the interior from direct sunlight.

The projection / overhang results in spaces being slightly stepped back. The spaces are attached to open corridors, deep verandas, generous semi-outdoor spaces, stairwells and atrium, resulting in an extremely airy structure supported only in part by columns.

The building is partly covered in bamboo screens, partly by glass surfaces, or it remains open, rendering a blur line between the sense of enclosure and openness.

The bamboo screen and the lightly woven blades placed on the overhangs deploy a second skin that provide privacy, reduce glare, and give a textural quality to the interior and exterior through a delightful play of daylight and shadows, while unifying the architectural scheme. 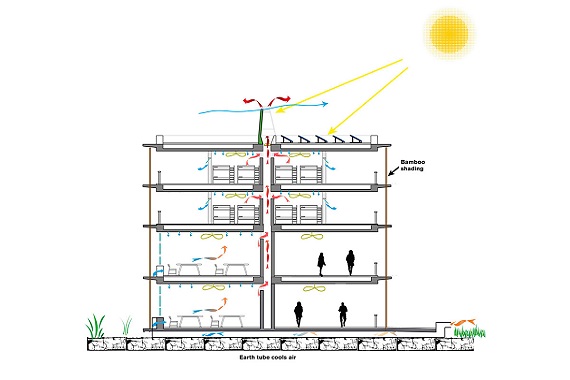 Earth ducts are 900 mm dia concrete hume pipes laid between the building foundation that run around 16 – 20 m in length underneath the building. Fresh outdoor air sucked in these earth ducts is passively pre-cooled and then diffused into the lower floor spaces at the floor level along the facades, enabling the air to circulate freely in the middle of the buildings.

Additionally, supply air enters the spaces through the strategically designed window and the doorways.

The vitiated air from all the spaces, due to convection, passively transfers through the exhaust grills located at the ceiling level into three separate centrally located exhaust cavities which are integrated in the structural core of the building and eventually extend out as solar chimneys above roof level.

These chimneys are wide, glazed on three sides with their rear concrete wall almost 5m high and are capped with louvered grills. This assembly is sun-driven that leads the warm air out of the building, passively driving the entire air flow and providing natural cooling throughout the building.

This meticulously designed natural air flow path through all the spaces in the building using architectural and structural infrastructure create year-round comfortable learning and living environment. 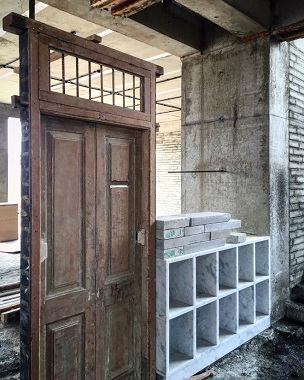 The building material palette highlights use of raw concrete, local stone and timber windows with large expanses of glazing rounded off by bamboo mats for shading on the exteriors, use of blockwork walls, coloured mosaic floors, teak doors, and various pastel hues on the interiors.

This mix of material textures was carefully selected and meticulously crafted to complement the surroundings. The palette focused on the longevity of the materials and cost reduction by using recycled materials.

The majority of timber windows are recycled from demolished structures, blockwork partition walls are burned from fly ash, floor mosaics are made from the remains of marble quarries, majority of doors are made of teak from demolition objects, and the pastel hues use natural pigments – largely contributing towards the sustainability goals of the project. 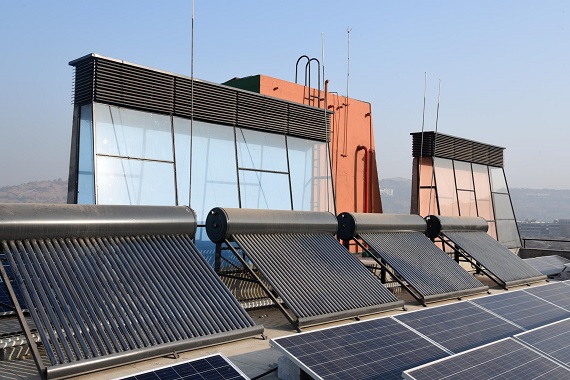 Photovoltaic solar panels and solar water heaters have been  installed on the roof to provide electricity and supply hot water to the building. 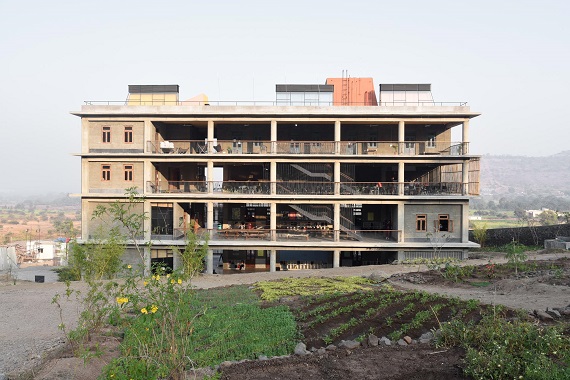