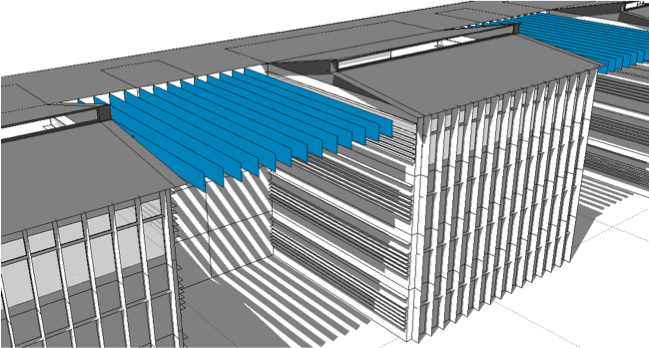 In the picture above, the shading strategy (vertical fins, horizontal slabs, covered courtyards) has been determined by developing a building model to predict the shading that will be provided by each of the strategies. External shading is orientation specific and can be effectively integrated into the building envelope if designed keep this factor in mind.

Structural controls like ‘external shading devices’ are essential environmental controls that either obviate or greatly reduce the need for mechanical heating and cooling to maintain thermal comfort inside buildings, by controlling heat gain through openings. Along with glazing type and size of the fenestration, shading devices are equally important in limiting heat gain from outside through radiation. External and internal shading devices can thus be used as an essential solution for achieving energy efficiency.

Efficacy of internal shading devices is limited as they absorb the heat once it has been transmitted inside the space and heat up themselves. This can lead to higher mean radiant temperatures inside the building.

Orientation of an opening and by extension, solar radiation incident on it, is the single most important factor in the design of its external shading devices.  Impact of seasonal variation in the sun path (and incident solar radiation) is linked to the orientation. Sun path is at a low angle and, slightly to the south of east and west during the winter season in northern hemisphere. In summer, sun path is at a high angle and, to the north of east and west. So shading for south openings in the south must allow penetration of the low angle sun for heat gain during winter but must block the same during summer. For opening in north, shading is needed only to prevent penetration of the high sun angle during summers. 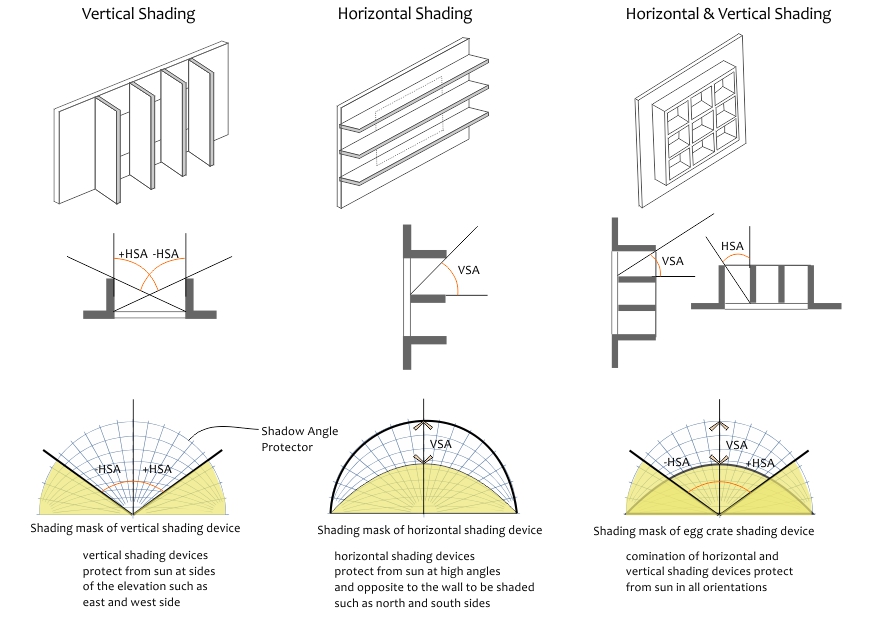 External shading devices must be configured according to orientation of the wall and location of the building (latitude). Both decide the time period, both daily and annually, for which the shading will be needed and angle of solar radiation on the wall. Shading masks, graphical representations of shading provided by shading devices, can be then used to design the most suitable strategy for providing shade

Shading can reduce solar gains on the building facade. Effective shading strategies for and NZEB should aim at virtually preventing any direct solar radiation from entering the building, especially during the summer months.

Shading reduces the effective solar heat gain coefficient (SHGC) of the glazing. This means that a cheaper glass with high SHGC can be used instead of high cost, low SHGC glass.

Shading also helps in reducing glare through the windows.  Users tend to pull down interior shade if there is direct solar radiation on the glass, this negates all the benefits of daylighting. Shading helps ensure glare-free daylight in the buildings.