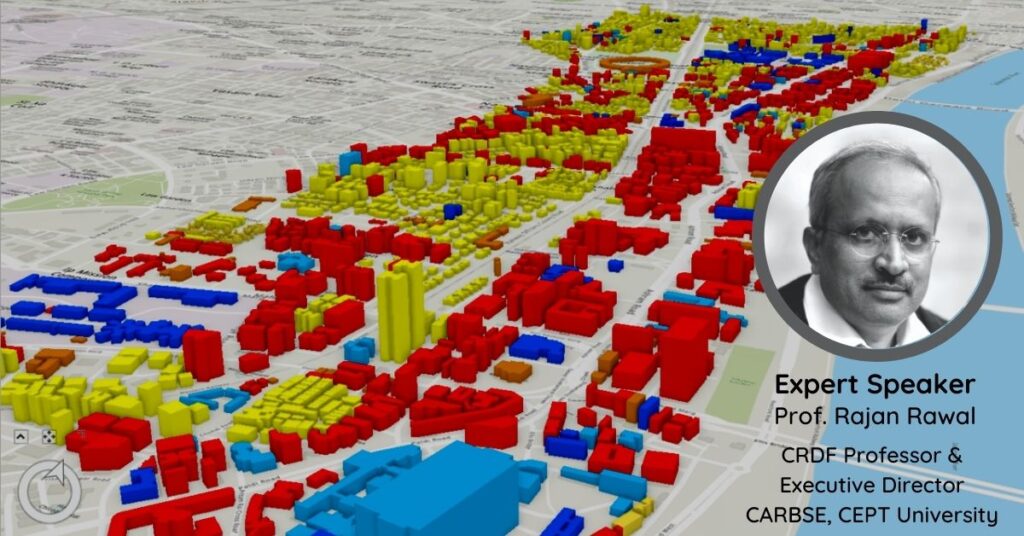 Urban energy models (UEM) are critical data-driven tools to support energy-efficient, climate-resilient city planning and its operations. They also play a key role in accessing the decentralised renewable energy generation potential within the city, which in turn help design and operate Net Zero Neighbourhoods. The development of UEMs depend upon the range of spatial and semantic details of the buildings, neighbourhoods and cities, UEM refers to the computational modelling and simulation of a group of buildings along with associated urban infrastructure. The webinar will introduce UEM fundamentals initially, explain methods and generic tools used for UEMs. Prof. Rawal will also share the UEM work currently underway for the city of Ahmedabad.

About the Presenter:
Rajan Rawal is a CRDF Professor at CEPT University and Executive Director of “Centre for Advanced Studies in Building Science and Energy” (CARBSE) at CEPT Research and Development Foundation. His research and education activities revolved around building envelop optimization, building performance simulation, thermal comfort and architectural science education. He serves on organizing the council of the Global Cooling Prize and on may other international committees He is the recipient of the Jeffery cook scholarship by the Society of Building Science Educators and is the first architect in India to receive the honour of ASHRAE Fellow. He is also Chair of Education at the International Building Performance Association (IBPSA).

This webinar is part of ‘NZEB Knowledge Series’ – an initiative supported by USAID’s MAITREE program (http://maitree.edsglobal.com) to accelerate the discussions and catalyze actions on Net Zero Energy Buildings in India.